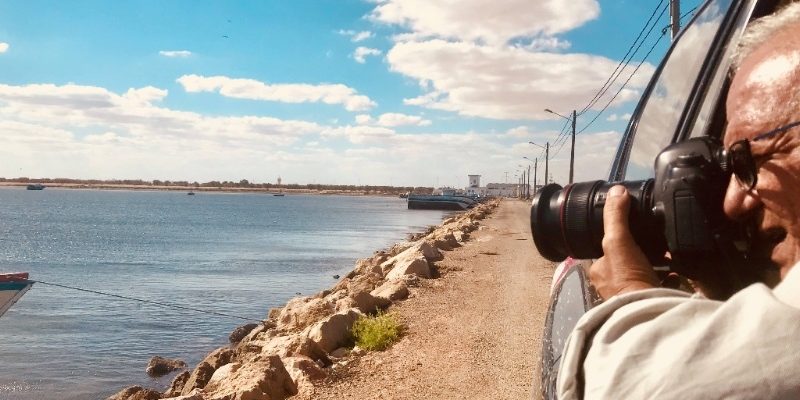 Investigating illegal bottom trawling in the Gulf of Gabès, Tunisia

In October 2018 a team of four Citizen Inspectors from three different countries gathered in Tunisia. Their aim was to investigate the use of illegal bottom trawls, locally referred to as “Kiss” (“bag” in Arabic), in the Gulf of Gabès and to count the vessels equipped with the prohibited gear to provide a realistic estimation of the total number of illegal trawlers operating in the area.

The Gulf of Gabès

In the Gulf of Gabès, that is located at the south eastern Tunisian coastline, we can find some of the largest seagrass meadows in the Mediterranean Sea. These seagrass meadows provide habitat, feeding and nursery grounds for many marine species, like sea horses and turtles. The whole ecosystem is therefore very sensitive to fishing pressure, and especially to fishing methods like bottom trawling. Fisheries in the Gulf produce ~50% of the total fish production of the country, around 50,000 tonnes per year.

Due to the loss of more than 30% of the total fish stocks, a closed season in summer has been introduced for trawlers in the Gulf of Gabès in 2009 in order to reduce the pressure on the ecosystem and to offer fish stocks a chance of recovery. However, the stocks are still in decline and this is also because the use of illegal “Kiss” trawls has not been affected by the introduction of a closed season. 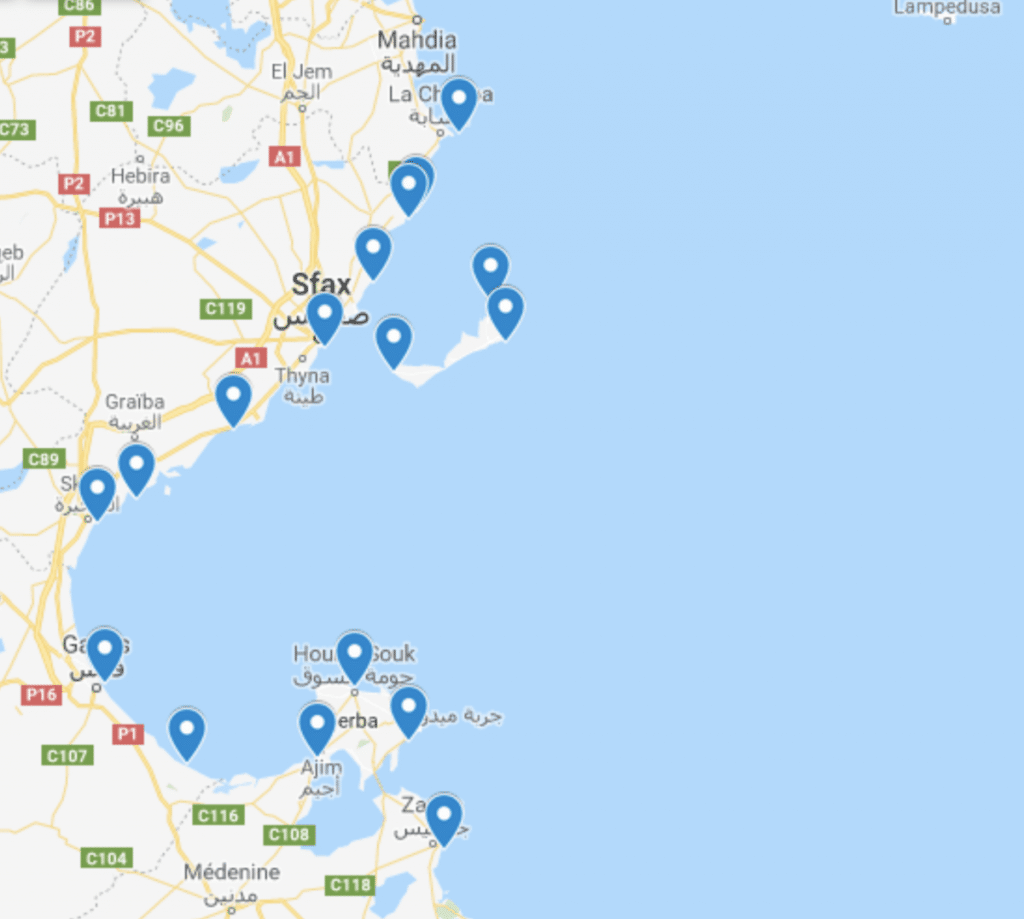 Cities and ports around the Gulf of Gabès inspected during our campaign.

“Kiss” trawlers usually display all the features and gears that can be found on regular bottom trawlers, but the vessel and gear used are much smaller and lighter. They rarely reach 10 meters in length and are made out of wood, but these vessels cause tremendous damage to the environment. “Kiss” trawlers can fish in average depths of 5 meters or less, destroying sensitive habitats and spawning grounds, by tearing out the slow growing seagrass meadows. In addition to this the mesh size of the “kiss” nets is much smaller than on a regular trawler, which makes them less selective and producing large amounts of bycatch. 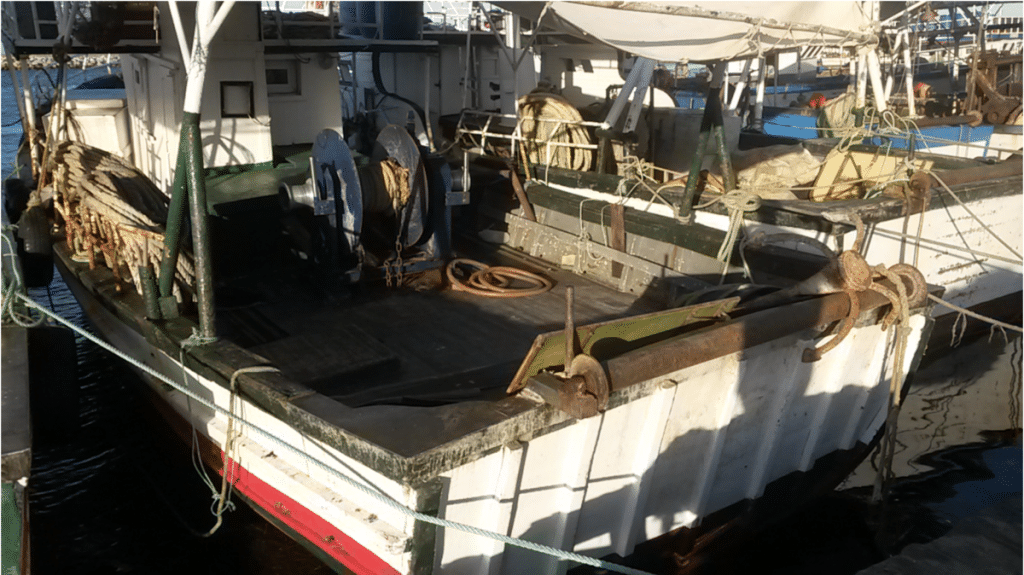 Deck arrangement of a Kiss Trawler in the port of Sidi Youssef.

Kerkennah is a unique place that has a long history of traditional fisheries and low impact fishing methods, such as fishing for octopus using stones and clay jars as traps.

The team spent two days inspecting the three fishing ports Sidi Youssef, El Kraten and El Attaya, and the countless small peers scattered around the islands. They were able to document a few illegal trawlers landing their catch on the first day and counted 115 illegal “Kiss” trawlers, which were mostly harboured in and around the port of Sidi Youssef on the island of Mellita. 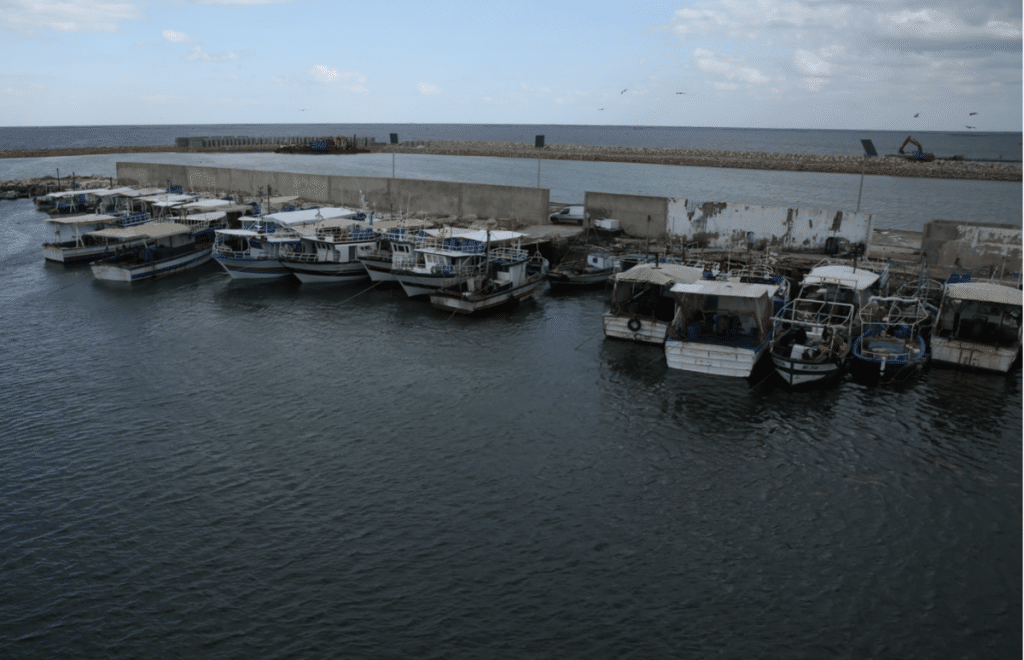 Illegal “Kiss” trawler docked in the port of Sidi Youssef.

In order to get some insights into the impacts of “Kiss” trawling on the costal communities the team conducted an interview with a traditional fisherman.

“It was an eye opening, but in the same time heart breaking experience for us to hear the story of this man in his mid-fifties, who has lived from the sea for almost all his life, and who has personally witnessed the degradation of the Gulf of Gabès and seen his income constantly decreasing. However, against all odds he refused to abandon the life of a fisherman or to break the rules in order to increase his catch.” – Sofian Zerelli, Tunisia campaign coordinator. 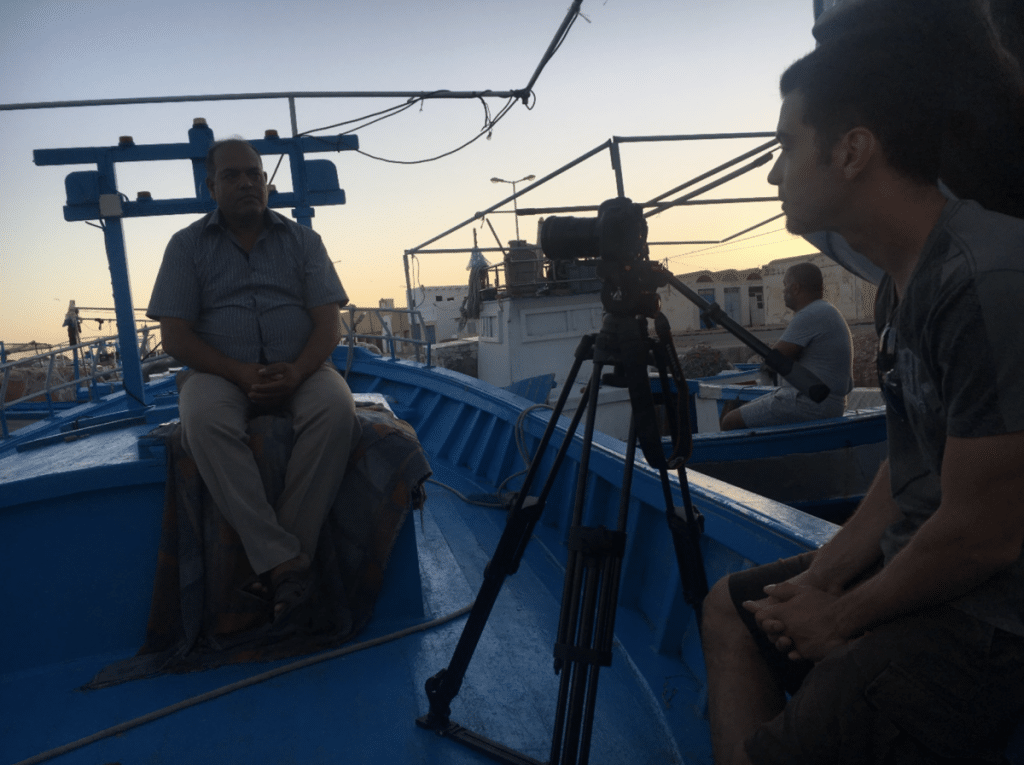 The next stop for our team was Sfax, the second most important city in the country with the biggest port in the Gulf of Gabès. The team inspected beaches, peers and ports along the northern coast, as well as the port of Louza. There presence of “Kiss” trawlers was overwhelming as they were found everywhere, from regular beaches to peers and ports, and even on dry land being maintained, geared up, or simply towed on the roads from one location to another. 116 illegal “Kiss” trawlers were counted and documented during that day.

On the next day the team did an inspection in the port of Sfax, where 147 illegal “Kiss” trawlers were counted. Documenting the boats in the port of Sfax was much more difficult than anywhere else, as people there were much more suspicious than in other locations, leading the team to make use of hidden cameras to secure evidence of illegal fishing.

“Fishermen on the illegal boats didn’t seem in any way bothered by the presence of coast guard officers, to a point where it almost didn’t feel like the boats and the people working on them were acting completely illegally.” – Sofian Zerelli. 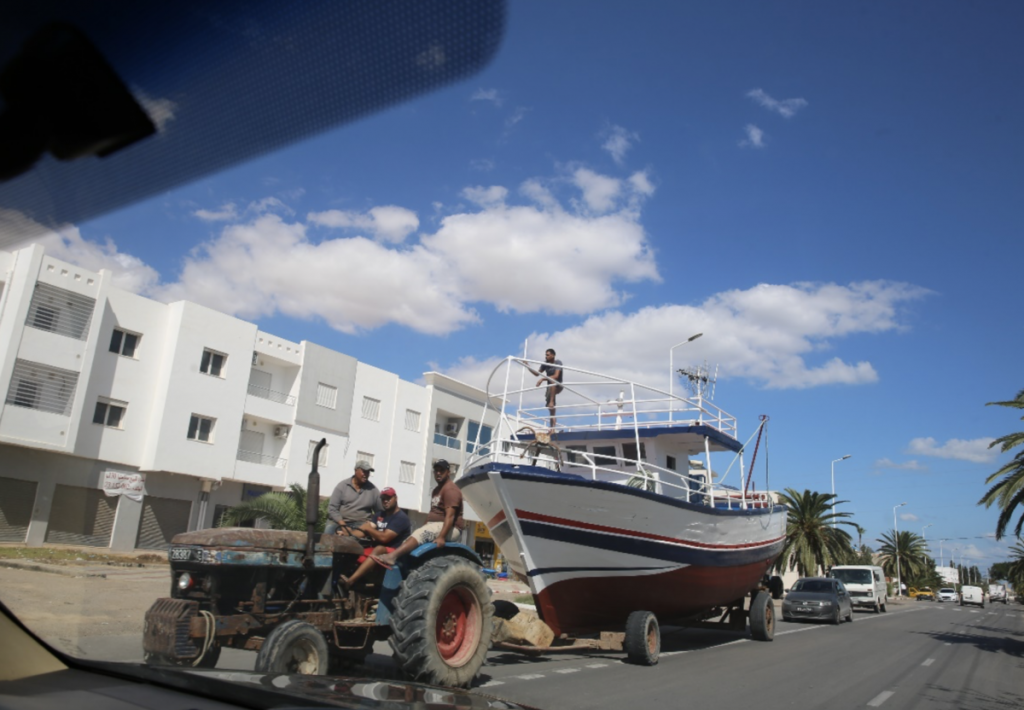 Other stops on the way

Skhira and Zabboussa are both small fishing ports, which are used by the same fleet of “Kiss” trawlers. Our Citizen Inspectors were able to document 38 “Kiss” trawlers in the two ports.

Gabès is the second biggest city around the gulf, and it has a big fishing port containing mainly a pelagic and an artisanal fishing fleet. Despite inspecting the port daily for three days in a row, the team did not find a single “Kiss” trawler in Gabès, nor did it in the port of Zarat.

On the last days of the investigation, the Citizen Inspectors went on to inspect the ports on the Island of Djerba, where no sign of “Kiss” trawling was found. The same happened when they visited the port of Zarzis, the second biggest fishing port in the Gulf of Gabès and the port of Chebba on the northern tip of the gulf.

Lessons learned from the campaign

It has become clear that the “Kiss” trawling issue is limited to the district of Sfax. This is an indication towards widespread corruption within the local Sfax administration as the observed illegal vessels were operating in plain sight, not being bothered by coast guard officers and concerned authorities. 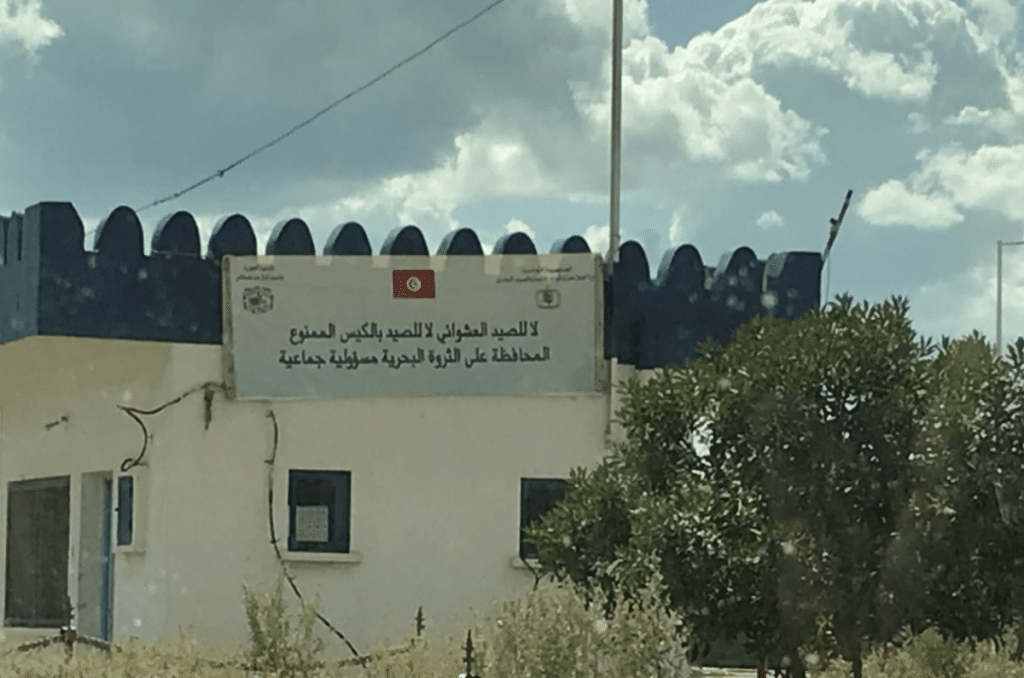 A big banner at the entrance of the port of Sfax stating “No to IUU fishing, no to “Kiss” trawling” – how ironic.

The total number of 416 “Kiss” trawlers documented by Citizen Inspectors during the campaign is only the tip of the iceberg. Our investigation took place during the last days of the closed fishing season, a time during which the activity of the “Kiss” fleets in the gulf is reduced. It is known that other illegal “Kiss” trawlers converge to the Gulf of Gabès from different locations during winter, when the fishing season hits its peak, so the number of illegal vessel grows considerably between November and February.

“It is staggering to know that there at least 416 illegal vessels operating these waters at any time of the year, but it is even more shocking to know that there are more than that, and that the number can grow considerably depending on the season, without any serious consequences for the offenders.” – Sofian Zerelli 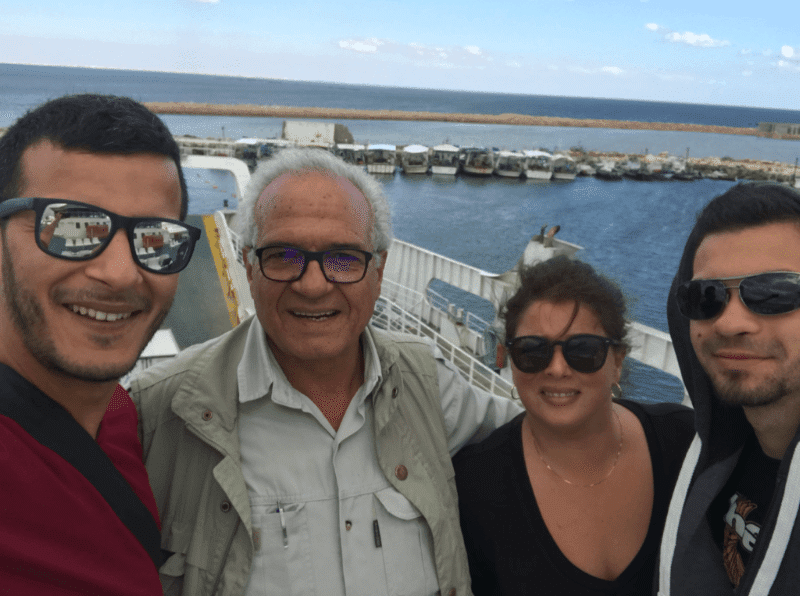 Thanks to our amazing campaign team! 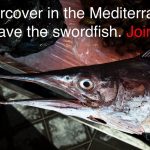 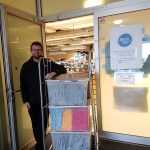