The European eel is threatened with extinction. The population has completely collapsed within a few decades despite the advice by scientists to stop fishing their populations. Meanwhile, governments and other political parties have turned a blind eye. Half-hearted methods are   developed  through lengthy processes. However,  one thing has been clear for years: until the European eel has really recovered and its natural habitats have been restored, all eel fishing must be stopped!

On December 16, 2020, the fishing quotas for 2021 will be decided in Brussels. Should the EU once again abandon the eel and not decide on an eel fishing ban, Germany must go its own way and stand up for saving the eel. We therefore demand a ban on commercial and recreational fishing for European eel in Germany. Support us and sign the petition so that we can stand up for the rescue of the European eel!

The European eel is threatened with extinction

Eels have existed for about 100 million years. They have survived the ice ages and adapted to tremendous climatic changes and shifting of continents. The eel was once one of the most abundant fish in European freshwaters and its range extended from northern Africa to the Arctic Circle. But now the survival of the eel is in serious danger because of us humans. Since 2008, the European eel has officially been an endangered species [1]. Only 1.5 percent of the original population size from 1979 is left!

Many dangers await the eels on their long journey: river dams block their way and intensive river straightening has destroyed their natural habitats where they find shelter and food. Polluted water, disease, and parasites plague them, and  everywhere nets and fishing rods are waiting to pull them out of the water.

Since the demand is so great, wild catches are not able to keep up with demands, As a result, European eels are being bred in aquacultures all over the world. But what hardly anyone knows is that eels do not reproduce in captivity. Every single eel that is raised in aquaculture was taken from the wild as a juvenile. Therefore, aquaculture is not a solution for the endangered eels, but an additional threat!

Politics has abandoned the eels

Although the European eel is threatened with extinction, it is fished legally and commercially in Germany and Europe. Every year scientists of the International Council for the Exploration of the Sea (ICES) recommend a fishing ban  for the European eel and every year the EU ministers decide to allow fishing anyway [2]. This weak decision was recently disguised by an annual closed season of three months. However, this is by no means sufficient to ensure the survival of this impressive fish species.

Since 2007, the EU’s “Eel Regulation” has regulated the management of the European eel, while also aiming to allow the endangered species to recover. However, despite all efforts, meetings and subsidies, there has been no recovery of the eel population in the last 13 years. Many of the agreed upon conservation measures have not been implemented to date and set goals have not been met. The Eel Regulation is a complicated and opaque instrument that is much more dedicated to ensuring commercial eel fisheries rather than saving the European eel.

The illegal trade of eel is out of control

In recent years eels have become scarce in the wild – but demand for them remains high. Over time, a growing black market has developed. Today, the illegal trade of glass eels is considered one of the biggest wildlife crimes in the world, ranking with the illegal trade in ivory, rhino horn and pangolins.

The export of European eels from the EU has been banned since 2010. Nevertheless, about 350 million glass eels (100 million tons) are illegally exported from Europe’s coasts to Asia every year – equivalent to a quarter of all European glass eels [3]! On the black market, a kilogram of live European glass eels can fetch up to €6,000 [4]. Glass eels are in high demand, especially in China, where they are caged and fattened in aquacultures until they are the right size for slaughter.

The eel is a miracle of nature

The European eel is one of the most fascinating and mysterious fish in the world. The eels are born in the Sargasso Sea east of Florida. The tiny larvae then float east in the Gulf Stream until they reach the coasts of Europe – three years and about 6000 km later. At this point, the tiny eels are only about seven centimeters in size and completely transparent. These glass eels then migrate up rivers, where they grow into adult yellow eels over the next few years. When the eels reach sexual maturity, they go through another metamorphosis in which their backs turn silvery, their eyes grow larger, and their head changes to a more pointed shape. Now – at the age of 10-30 years – the eels are ready for their long journey back to the Sargasso Sea, where they were born. Without feeding even once, they travel the entire distance back to reproduce – after which they die. Eels reproduce only once, at the very end of their amazing lives.

Eels are a miracle of nature. There is hardly a second species on our planet that goes through such a complex life cycle. To this day, the spawning behavior of eels is not fully understood, and the exact place where eels meet in the middle of the ocean to reproduce is a mystery.

Eels are an incredible species and we really don’t want these animals to disappear! Support our petition and help us to save the eel! 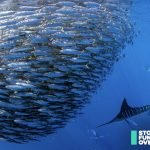 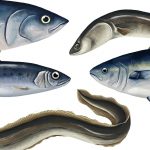 Next Story:
Introducing the Encyclopedia of Fish

One Reply to “Put an end to eel fishing in Germany! Sign our petition!”