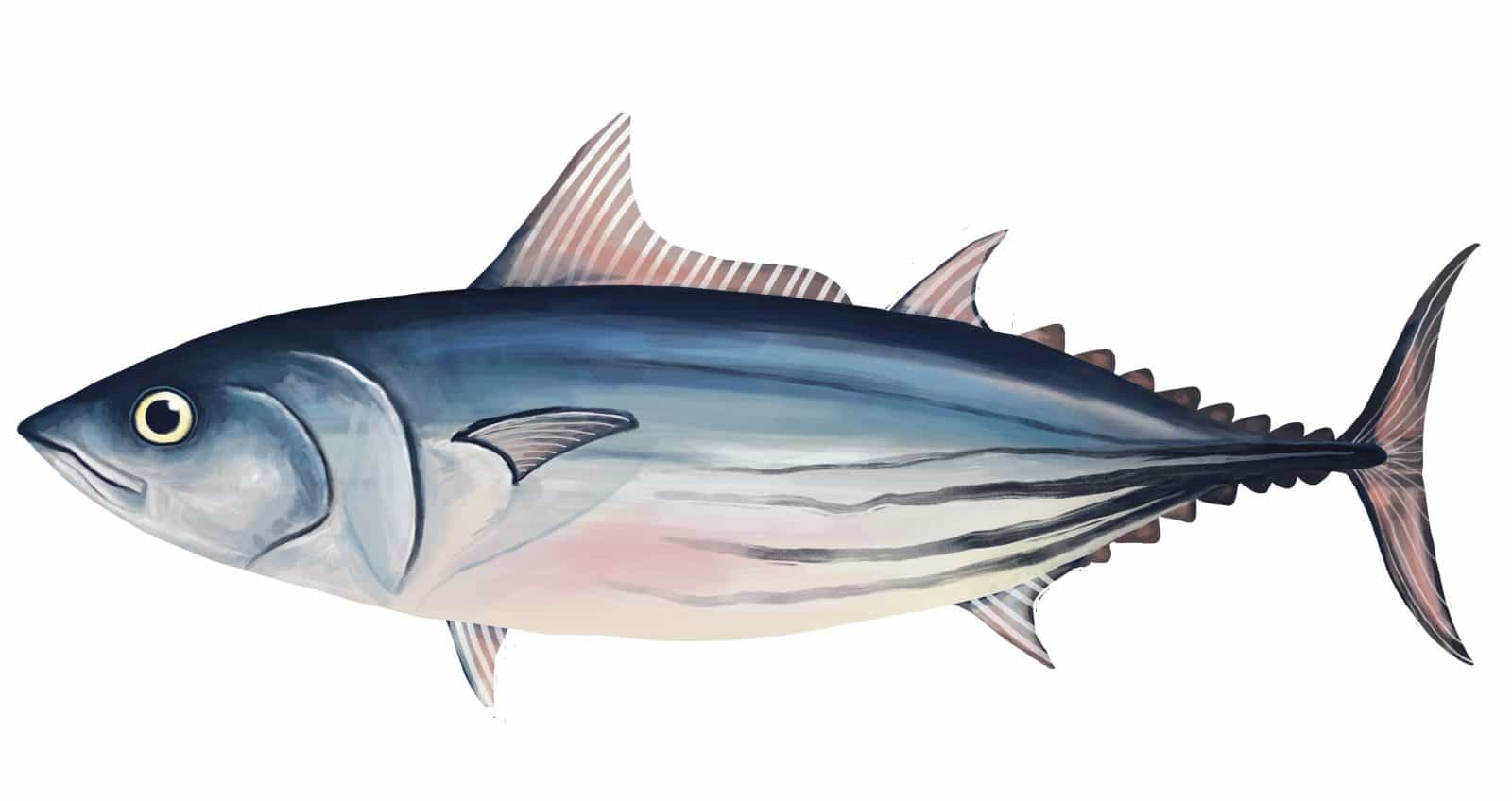 Skipjack tuna are the smallest of all tuna species, and can grow to a maximum of 110 centimeters in length. They have a streamlined body that is mostly without scales, except on the lateral line. Their backs are dark purple-blue and their lower sides and bellies are silver with four to six dark bands. Skipjack tuna lack a swim bladder and therefore need to keep swimming at all times to avoid sinking.

They are at the top of the food chain and feed on squid, smaller fish and crustaceans. Skipjack tuna reach sexual maturity at age 1-2 and can live up to 8 years. They are the most fecund of the tuna, and reproduce all-year round. In tropical seas female skipjack tuna can spawn almost daily! Skipjack tuna normally gather in large schools in surface waters. Schools are often associated with birds, sharks, whales or other tuna species.

The skipjack tuna lives in large shoals and is found in offshore tropical and warm-temperate waters. It occurs in the Eastern Pacific from British Columbia to northern Chile, throughout the warm Atlantic, including the Caribbean and the Gulf of Mexico and in the Mediterranean. Skipjacks are thought to have a north to south migratory seasonal pattern but it is still unknown whether or not these tuna migrate with a purpose.

The greatest threat to skipjack tuna is fishery: they make up 60% of the commercial tuna catch worldwide and are mostly used for canning. In some areas the use of fish aggregating devices (FADs) is killing large numbers of juvenile skipjack tuna, a trend that is threatening the survival of the population. Although skipjack do provide food and livelihoods for people, they are more than just seafood. Tuna are a top predator in the marine food chain, maintaining a balance in the ocean environment!

Skipjack are the smallest and most abundant of all the tuna species, and with reported landings of over 2 million tonnes per year, it is one of the most important commercial species worldwide. As such, Skipjack tuna is the most commonly caught of the tunas and is the species most often used in the canned tuna industry. While it is currently classified as “Least Concern” in the IUCN’s Red list and many consider the landings to be sustainable (45% of landings meet the standards of the Seafood Watch’s “Good Alternative” rating and 7% of the global landings are certified as sustainable by the Marine Stewardship Council), the method of capture is extremely damaging to surrounding wildlife. With most of the landings coming from purse seine nets (often with the use of FADs), the resultant bycatch from the Skipjack fishery is thought to be extensive, with unregulated damage being inflicted on oceanic sharks, dolphins, turtles, and rays.

Skipjack caught using the “Pole-and-line” method are commonly considered to be a much more sustainable option, and most packaging will specify if this is the method employed.